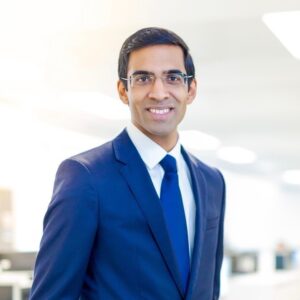 Rajay Naik is Chief Executive Officer of Skilled Education – the rapidly growing “catalyst of online education” for leading universities, large enterprises and pioneering governments including the University of Cambridge, LSE, UK government and National Health Service. Skilled was named EdTech Provider of the Year at the prestigious Education Investor awards in December 2021.

Rajay was formerly CCO of Study Group, the world’s largest pathway provider, and Founder/CEO of Keypath Education, a major online programme management company which continues to operate the online degrees of the University of Exeter, Aston University and other institutions. From 2010 until 2015, he served as Director of The Open University where he was co-founder of the FutureLearn MOOC platform. Previously he was one of five members on the Independent Review of Higher Education Funding and Student Finance chaired by Lord Browne, board member of Coventry City Football Club and Chairman of the Big Lottery Fund which invests over £1.5bn per year. He has also held senior roles in government and co-authored Learner Voice.

Rajay continues to serve as Chairman of the UK Commission on Lifelong Learning, non- executive of Pay.UK which oversees the UK’s payments system and Governor of the Ditchley Foundation.